Ruben V is an accomplished artist.  He’s released eight solo CDs, 14 group albums and averages over 120 shows a year.  He is a guitar player, songwriter, producer and family man. He’s built a huge following of Ruben V Band fans – all while keeping a sense of humor and a genuine Texas charm.

But first and foremost, there is the music.  It’s a fresh, smooth blend of blues, Latin, soul, and rock. It’s an ambitious mix of the music that moves him and in his skillful hands, becomes a truly energizing and enjoyable experience.  The result is stylistically different from his peers – it’s alluring, soulful, fun and mature.  As he says, “it’s everything I love about music.”

For a man who would turn out to be such a celebrated guitar player, Ruben was self-taught – old school style.  “I would slow down our old 45 albums on the record player and learn that way. I was also front and center at every concert – watching and listening. Then it was just hitting the road. There’s no better way to learn.” Hitting the road began at 15 for Ruben, who played in a string of bands and eventually landed an Indie record deal with his heavy metal band, Final Assault.  The unexpected death of a friend, the band’s bass player, brought everything to a halt for Ruben and he began questioning his direction.  Again, it was music that pulled him back in.  “I was in a dark time in my life when I saw Stevie Ray Vaughan in concert.  It was the opposite of the heavy metal bands that were defining the time.  I wanted to play Stevie’s kind of music – to bend a guitar string like that because that’s what I felt.”  That performance is what drove him back to writing and playing, but this time, he surrounded himself with his brothers and the group began touring clubs in the area.  As time passed, the shows became bigger and the four albums they put out became heavier, but, again, that sound wasn’t what Ruben had envisioned for himself.  Forced to confront the different directions the brothers were heading, Ruben parted ways with the group to pursue his own musical path – one that was true to him.  That becomes the essence of Ruben V’s music.

Putting out great music meant finding a producer with equally high standards and the talent to match.  It was sheer determination that led Ruben to search out two famed producers.  Richard Mullen produced Ruben V’s first three CD’s: In His Hands, Home and Let Me In.  Mullen’s previous work included Eric Johnson, Joe Ely, and Stevie Ray Vaughan.  Jim Gaines, whose previous credits included multiple Grammy Awards and 4X Platinum work with Santana, Blues Traveler and Stevie Ray Vaughan.  The collaboration between Gaines and Ruben produced I AM, Labor of Shame and Come to Me.  “Jim pushed me and brought out a more Hispanic flavor than what I had done in the past. He’s an amazing man and I’m blessed to work with him.”

Every show is different; Ruben has a vast catalog of songs to pull from.  They may play a familiar song but change the tempo or instruments.  The Ruben V shows become enlivened jams inciting the audience into a musical frenzy.  It keeps the audience entertained and coming back for more.  From here, Ruben V will continue to pursue what has been in his life at every turn – he’ll tour, write songs and make albums.  The musical path that he’s followed – varied, honest and sincere – may not have always proved the easiest, but from a man who knows where he comes from, playing music his way is the only way to go.  “My guitar might change shape and size; but, those six strings will always be a part of who I am and who I have grown up to be.” 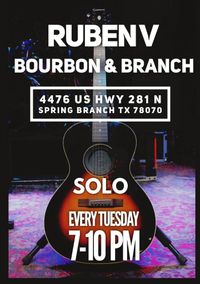